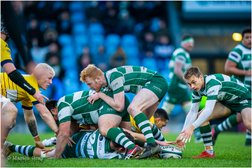 A CELEBRATION day for the Armstrong brothers and Guernsey Raiders on their last home league appearance of the campaign, fell flat with a 31-point defeat to the talented Worthing Raiders.

On a day when Anthony led out the home side on his 100th appearance which, coincidentally or not, fell on the same day ‘little’ brother Matt made his 50th, the visitors showed plenty of class and won comfortably.

The points were in the bag by the half hour mark, by which time Worthing led by 26.

The previous week Guernsey Raiders had the capability to turn around a significant deficit, but Worthing were a wholly different proposition to Canterbury and despite scoring three tries through props Sam Steventon and Dan Morgan, as well as one from scrum half Charlie Simmonds, we were never in the game.

Worthing raced over eight times and six times McClean, who dived over twice himself, converted the scores.

The game was also notable for Darrin Bellingham coming off the bench to also notch his 100th appearance for the club.

Guernsey stay 10th in the table.